Political economy, the first objective of the science and technology should be to conquer the Earth 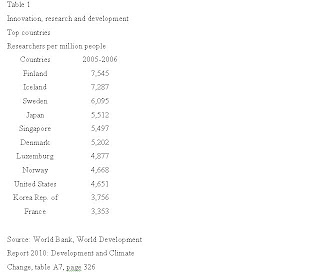 The figures confirm that the most developed nations concentrate the most number of the world researchers; by group of nations the Nordic countries are the main.
In the next table you can appreciate the contrast between the most advanced nations and the Latin American countries. 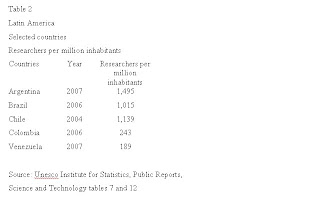 That is the reality that should be modified; the underdeveloped nations should increase the number of their researchers and direct its attention to those problems that most affect those countries. It is the local solution of the problems a way for the global advance of humanity. The regions or countries might create their own scientific and technological methods for to resolve their own problems. Of course, the paper of the global science and technology is something essential, but should exist too the appropriate local or regional contribution.
Cultural duality
It is the coexistence of the most advanced scientific and technological advances with the most precarious and savages forms of live. If you visit some regions of the world you can appreciate that duality. For example some tribes of the Amazonian regions still live in the Stone Age but in those regions you can find, in turn, instruments of the modern civilization.
There are also educated and apparently civilized people that, nonetheless, in their attitudes and mind still live in the Stone Age.
Conclusion
Man is conquering the space but still he has not conquered the Earth. Three big problems deserve the attention of the world leaders: the poverty, the lack or scarcity of natural resources and the damage to the environment. They are politics, economics, scientific and technological problems. The political economy might give a very important contribution but the science and technology must provide the other part. There are concrete problems that need answer: the water scarcity, the pollution, the nuclear, industrial and cities waste disposal, the destruction of the forests, the desertification, the hunger, the poverty and the unemployment.
The objective of the sciences must be the human beings happiness.
What do you think?
Publicado por Pablo Rafael Gonzalez en 10:48 No hay comentarios:

The pattern of consumption followed until now by the world economy has been based in the intense use of the natural resources and technologies for displace the workers.
By force of the reality that situation will have to change; the reason is very simple: the natural resources are every day more scarcely and the contamination everyday also grows. A new pattern of production and employment will have to be created as a consequence of this situation.
The new technology
One of the big challenges of the modern science and technology is to develop a new model of production less contaminant and a model of employment for to balance the requirements of the technologic development and the social need of creating new jobs.
According with the World Bank 2009 World Development Indicators, page 127, “Energy-related carbon dioxide now accounts for 61-65 per cent of global green house gas emissions…”
These emissions are a serious threat for nature and the human live. The scientists consider that those gases are the cause of the global warming and their consequences, among them, the oceans level increase, changes in the patterns of rain that affects the agriculture and an augment of the natural disasters like intense floods, droughts, storms, hurricanes, among other events.
In the following table you can appreciate the principal generators of carbon dioxide. Table 1 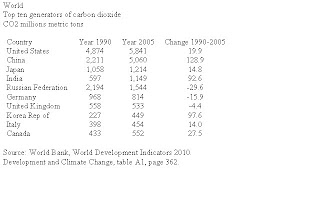 The figures confirm that are the United States and China the top generators of carbon dioxide. The comparison between 1990 and 2005 put in evidence the great growth of China in only fifteen years, country which gases emissions are now very near of the United States level.
The emissions of United States and China are something extraordinary that can not be compared with the rest of the countries. The Russian Federation that in the past was the third generator of carbon dioxide emissions now, in the year 2005, is very far with 1,544 millions of metric tons.
These figures reveal that the future of humanity is in the hands of the leaders of the two powers of the world, United States and China; if they do not adopt effective measures for diminishing these emissions the damage to the entire planet everyday will be worse.
The great problem is how conciliate the economic growth with the environment. If the politicians adopt a clear decision in this matter, the scientists will find ways for make friendlier the production. But the most important is the political decision. Until now the advances has been precarious because it has not had a determinant political decision of the principal leaders of the United States and China.
Fossil fuels impact
The substitution of the petroleum is not possible, among other reasons, because of their energetic intensity that can not be reached by other similar sources. Nevertheless, the technology might create new machines able of reducing the consumption and the level of pollution.
In the transport sector the tests with hydrogen and other sources has been a success but they can not eliminate the oil. The true then is that the world have not other option but to exist side by side with the petroleum for many years more. It is important to say that the situation is difficult because the petroleum is running out in many regions of the world and too few countries will concentrate the most reserves.
In parallel, the international agencies and the governments can adopt effective environmental policies, like a Global Program of Reforestation that moreover of creating millions of new jobs would reduce the global warming.
The effects of the deforestation in global scale are something of great magnitude. In the next table you can see it. 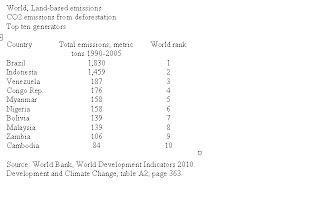 Brazil is in the top of the list. This means that the Amazonia is in the first place. The Amazonia is the last forest reserve that still survives in the world. Every year their lands are razed by farmers, lumberjacks and miners. If the destruction of the Amazonian territories is not stopped in too little time the entire world will suffer the consequences. The Amazonian forests are the biggest home of natural species, animals and plants, and reserve of big reserves of sweet water. The behavior of the global climate is linked to the climatic conditions of the Amazonian region, for that reason any change in this affects the entire world.
On March 25, 2010 the Food and Agricultural Organization, FAO, spread the Global Forest Resources Assessment 2010, and assured that “…The world deforestation, mainly the conversion of tropical forests to agriculture land, has decreased over the past ten years but continues at an alarming high rate in many countries…” The report says that “…Globally, around 13 million hectares of forests were converted to other uses or lost through natural causes each year between 2000 and 2010 as compared to around 16 million hectares per year during the 1990s…”
The report highlights the effort and success of China and India in matter of reforestation.

Less oil more coal
In the previous tables it was proven that the contamination by carbon dioxide has increased in the last years. This phenomenon has happened in spite of the oil consumption decrease experimented by the United States that is the first consumer of the world.
The oil consumption of the United States it reduced in 5.61 per cent between the years 2004 and 2008 but was substituted by China that it has become in the second consumer of oil; in the mentioned period, China increased their consumption of refined products of oil in 22.24 per cent, as you can appreciate in the table.
Table 3 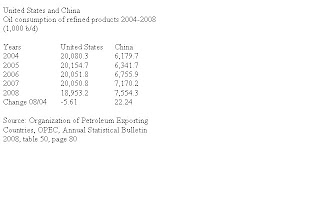 But this augment of the China’s consumption of refined products of oil do not justify the important growth experimented by the carbon dioxide emissions of that country in the last years. Then the question is why this happen?
The answer may be in the consumption of coal that is the most contaminant of the fossil fuels. Indeed, China enhanced their coal consumption in 43.06 per cent between the years 2004 and 2008, followed by the United States, India and the Russian Federation.
Table 4 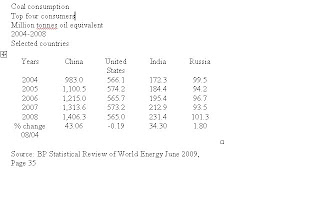 The consumption of coal is growing as may be appreciated in the table. The amounts are amazing; China consumes more of the double of the United States and seven times more than India. This trend should be modified because of their negative effects. These countries and the world in general should diminish their consumption of coal and substitute it by other less contaminant sources; the technology might offer some options in this sense, perhaps through the use of the geo thermal energy and green sources like the energy of the sun, the wind and the seas.
Conclusion
The consumption of energy will increase in the coming years because of a simple reason: the world population growth. This means an increase of the level of contamination worldwide. The most augment will be in the underdeveloped nations.
The great challenge for the politicians and the scientists is to develop new technologies for guarantee: a) the production efficiency b) the creation of new jobs and c) to preserve the environment.
It will be necessary to make a great economic effort in science and technology. To open the door at new ideas, new people; to listen what the unknown innovators have to say. The human being creation capacity is infinite and in any mind in any place of the world might be the solution of problems that that affects humanity.
The international agencies and the governments might create rewards, prizes, to the creation in the main fields of the knowledge; for example, to promote a global program for improve the production, create jobs and preserve the environment.
There are two options: a) to continue the routine followed until now or b) to explore new roads, to add new ideas, new people of the entire world at the task of creating a better world. What do you think?
Publicado por Pablo Rafael Gonzalez en 7:09 No hay comentarios: