How the beaches disappear 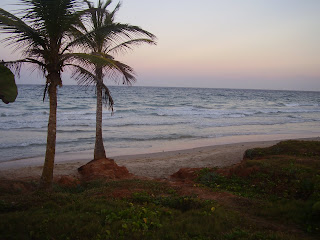 The photo belongs to the beach of El Tirano in the Margarita Island (Venezuela) at the Eastern Caribbean. This was a spacious beach but progressively the sea has reduced it extension. The local press assures that it is a consequence of the sedimentation.
Is it an effect of the Climate Change, of the global warming? I do not know which the cause is really but the true is that the beach is disappearing. The phenomenon is happening in other beautiful beaches of the Island; especially in one of the world most famous places for windsurf: El Yaque. This kind of facts should call the attention of all the people involved in the environment protection.
Those are specific cases but it is sure that something similar is happening in other places of the world. The scientists have warned that the global warming will increase the oceans level in an important amount and that this fact will affect the low coastal regions. Is this the Margarita situation? The scientists must give its opinions…The destruction of the trees; the construction of big buildings, artificial fences and harbors are other important causes of the coast depredation.
Preserving the coasts and the seas resources is a priority.
Publicado por Pablo Rafael Gonzalez en 13:22 No hay comentarios:

While millions suffer hunger other spend trillions in weapons and luxury

Dr. Josette Sheeran, Executive Director of the United Nations Food Program, has announced that the Agency has only one third of the resources that need for attending 108 millions of persons this year worldwide.
This means that millions of people will not have the minimum food for surviving. While this happen, the world spend trillions of dollars in weapons and luxury.
The problem of hunger is a shame for the humanity. All the citizens of the world have the right of receiving the necessary food for living. The governments have the main responsibility in the creation of the economic conditions: jobs and income for the population.
Dr. Sheeran said that the Food Program needs only $ 6.7 billion for the next year. This amount is something insignificant compared with the money used for saving the banks during the recent financial crisis.
The world leaders should reflect on this theme. Only it is necessary to make a review of the priorities. The peace and the human beings welfare deserve more attention than the war and the tastes, the preferences, of rich bankers.
I read recently that as a consequence of the financial crisis of the UN Food Program, only in Guatemala 100,000 children will not receive the food help. The figures in other countries as Bangladesh are unbelievable: 5 millions of affected people.
The food production is a priority. And this means that it is necessary to adopt measures to guarantee the environment protection. At the rhythm of pollution followed until now, in too few years the planet will confront serious problems for providing the food that the global population will need.
The scarcity and the lack of water is one of the principal threats. And one of the causes of this phenomenon is the climate change.
In Copenhagen, in December, the world leaders have the opportunity of to adopt the necessary policies to preserve the nature and the life of millions of persons.
Publicado por Pablo Rafael Gonzalez en 11:37 No hay comentarios:

I would like to write good news ever. But when you analyze the human behavior sometimes this is not possible; specially, when you consider the human being attitude regarding the natural resources conservation.
Man is a depredator of nature. He has a trend to destroy the wealth given by God to humanity.
Two hundred ten years ago, in 1798, a brilliant priest and economist, Thomas Robert Malthus, (1766-1834), in his Essay on the Principle of Population said that “the power of population is indefinitely greater than the power in the earth to produce subsistence for man.”
Malthus could not imagine that two centuries after the Climate Change would confirm his theory. Malthus did not know the Climate Change. The Pre Industrial civilization ---the Second Industrial Revolution began at the middle of the XIX century--- was a green and not contaminated world.
But now, almost 210 years after, the facts are confirming that the possibility of producing food for feeding the growing world population is every day less. The Global Warming is affecting the sources of water worldwide. Without water the agriculture development is not possible and the true is that every day the availability of this resource is diminishing in the world.
The World Bank in its World Development Report 2010, Development and Climate Change, warns that “the developing countries would be the most vulnerable by the Climate Change, with permanent reductions in GDP of 4 to 5 per cent for Africa and South Asia.” In the Foreword of the same Report, the President of the Bank, Robert Zoellick assures that “it is crucial that countries reach a Climate Agreement in December in Copenhagen that integrates development needs with climate actions.”
To adopt the measures for resolve the problem of the Climate Change and its consequences is something essential to guarantee the world surviving especially, the future of our sons, grandsons and the next generations.
Publicado por Pablo Rafael Gonzalez en 13:48 No hay comentarios:

Diminishing the CO2 emissions is the great challenge

If the humanity is not able of reducing the dioxide of carbon emissions in too few years a good part of the Earth will become a desert.
The scientists has enough explained the negative effects of the fossil energies use. One of the most important is the glaciers melting worldwide. Already we know the disastrous effects caused by the global warming in the Arctic, in the Antarctic and in the Himalaya Glaciers that nurture the principal rivers of Asia. The same happen in the Andes Glaciers in Latin America.
Practically an important part of those glaciers are quickly disappearing. As consequence of that process, already cities as La Paz, the Bolivia’s capital, is seriously threatened by the lack of water. A similar phenomenon is happening in other regions of the Andes.
Other consequence is the level of the seas augment. The coastal regions worldwide are too threatened by the global warming.
Moreover of the fossil fuel emissions, humanity is affected by other great problem: the forests fire. The last week of August 2009 ---through the international news agencies--we could appreciate the destruction caused in Greece and in California in the United States. But there are too many similar situations ---not reported by the news agencies---in other regions of the world, especially in the Amazonia Region, in Africa and Asia. The struggle against the forests fire should be other important objective of the national governments policies and of the international institutions as United Nations.
The other political necessary measure are the development of new sources of clean energy, to preserve the forests that still survive, to develop a global campaign of reforestation and to save the sources of water, avoiding their contamination.
Pablorafael_gonzalez@yahoo.com
Publicado por Pablo Rafael Gonzalez en 9:42 No hay comentarios: