The debt is not a problem for the U.S.

Since the Agreements of Breton Woods, in the post war, the value and support of the national currencies of the different countries of the world was established in base to the dollar of the United States of America. In those years, in Breton Woods, the countries agreed: a) the creation of the International Monetary Fund, b) that the international reserves of the nations must be kept in dollars c) That the dollar would be the international currency of interchange, and d) that the emission of national currencies should maintain a relation with their reserves in dollars. For example, if you set that your national currency is worth in two (2) units per dollar, this mean that each national currency in circulation should be supported by a reserve of 0.50 dollars, but not ever the nations carry out this rule. In all the cases, the set of the parity regarding the dollar is an act of sovereignty of each government; this means that they can issue more or less amount of national currencies.
I don’t believe in public fiscal deficit; the governments have sovereign capacity to issue national money; which is the support? The people faith, nothing more; none currency has an own value, per se. The currencies of all the countries are simple papers without intrinsic value that are accepted by the people to make transactions in the market and the governments have the power to issue those papers. In the past, the currencies had an intrinsic value, because they were made of gold or silver. But with the apparition of the bills of paper the situation changed. At the beginning the bills had a support in gold but along the time this support was eliminated and now its support is only its credibility, its acceptance.
The currencies cannot be supported in gold for a simple reason: all the gold that exists in the world is not enough to support the big amount of money that circulates in the world.
The debt of the United States instead of to be a factor of weakness of its economy and the world economy, is a factor that reveals the strength of the US economy. The financial crises are caused by the owners of private fortunes to obtain personal benefits. They do the crisis and the governments pay the bailouts. That is the true truth.
Publicado por Pablo Rafael Gonzalez en 21:25 No hay comentarios:

A concrete idea to combat the unemployment, political economy

“The economic crisis has taken its toll on the young, ILO estimates that the global youth unemployment rate rose to 12.6% in Helen Clark, Head of the United Nations Development Programme, March 21, 2011.
Index
1.     Overview
2.     Inexactitude of the statistics
3.     The sub employment is not revealed
4.     The intense use of technology and its effects on the employment
5.     Machine substituted the work of man
6.     What to do
7.     Demographic control
8.     The double working-day and the half working-day
9.     Global campaign of reforestation
10. Conclusion
1.      Overview
The unemployment is the worse illness of the society. The effects on their victims are of devastation. The employment is essential for the happiness. Unfortunately, the unemployment affects millions of people in the entire world. But there is other similar phenomenon: the sub employment (underemployment); this affects people that exert an economical activity but do not enjoy of a secure income neither the social benefits of the formally employed.
If you add the figures of the unemployed to the figures of the sub employed, the total amount is something really amazing, especially in the underdeveloped nations. The problem is that the figures of sub employment generally stay hidden. The official’s statistics usually do not reveal the sub employment figures.
The unemployment and the sub employment are the main cause of the poverty. So that the first measure to combat the poverty must be the creation of jobs.
But the creation of jobs requires several conditions. The jobs cannot be generated by magic. The creation of jobs responds to concrete needs of the society. An entrepreneur creates a job when he is sure of the utility of that job.
For the creation of a job it is necessary to make an investment; this means the use of financial resources and the employ of material goods, among them, resources of energy ---like petroleum--- that are every day scarcer and expensive.
One hundred years ago, the situation was different: there was abundance of material resources, especially of natural resources. For that moment, still man had not devastated the Earth wealth. The petroleum exploration was hardly beginning and the forests, rivers, lakes and oceans had not been razed.
Now, in the first years of the 21st century, the reality changed completely. Today, the limitations of natural resources are something real. The reserves of conventional petroleum have diminished in a sensible amount; hundreds of animals and plants species have disappeared; the forests, the marine resources and the reserves of water are also in critical situation in many regions of the world while man realized 2,053 nuclear detonations only between 1945 and 1988. The food is seriously threatened by the drought, the water scarcity and now by the biofuels. For example, by the year 2007, 25% of the corn production was for ethanol. On March 31 2011, the Food and Agricultural Organization, FAO, described as “potentially catastrophic climate impacts on food production over the long-term,” in a letter to the Convention on Climatic Change.
But while the natural resources experiment a reduction, the population grow in a constant form. It is a contradictory phenomenon that threats the humankind survival at mid term. The world is overpopulated. This means that the resources are not enough to satisfy the demand of the world population, among them, the demand of employment. You can verify it in a simple form: observe the traffic jam, the limitations in the water availability, the price of gasoline, the number of unemployed and sub employed in your community, the files in the banks, supermarkets, in the drugstores, in the bakeries, the scarcity of food and basic services. This is especially visible in the underdeveloped nations.
2.      Inexactitude of the statistics
I have serious doubts about the exactitude of the statistics of labour; I will explain why. For example, if you study the statistics of unemployment of , you will find that the level of unemployment was ---approximately--- an average of 3% ---this represent full employment--- between the years 2003 and 2008, like you can see in the table 2.  I do not believe that those figures are true because of a simple reason: during the same period, the immigration of Mexican citizens toward the was huge, occupying the first place among the foreign-born population, as may appreciated in the table 1.
Table 1. , Foreign-Born Population by Race for Countries with 750,000 or more Foreign Born: 2007. Numbers in thousands 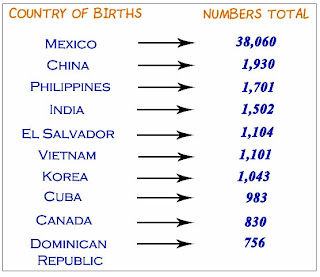 Source: Census Bureau, 2007, American Community Survey.
Available in Internet in: http://www.census.gov/prod/2010pubs/acs-11-pdf
For the period 2003-2008, the official statistics reveals that in the the unemployment was superior to 5%, this mean, superior to the ’s unemployment rate; see table 2. This fact confirms that the doubt about the exactitude of the statistics is absolutely reasonable. The basic question is:  if has a level of full employment then why do the Mexicans citizens abandon their country to look employment in the ?   A society that enjoy a high rate of employment, do not experiment a high percentage of immigration of its workers. Then, the logic conclusion is that the official unemployment figures of are not true. The figures of immigration reveal the economic disparities of the societies and especially their amount of unemployment and sub employment.
Table 2. Unemployment, selected countries of