Fiscal deficit and size of the economy

Standpoint about the recurrent economic crises
Index
1.      Scope of the thesis
In this work, I want to demonstrate that:
a) The fiscal deficit is a consequence of two situations, essentially: a1) the augment of the population needs and/or a2) the corruption,
b) The reduction of the public spending for diminishing the fiscal deficit is not convenient because this strengthen the recession and the unemployment, and
c) The States (governments) do not have restrictions to expand their internal financial policy; the true problem is the lack or scarcity of international means of payment, international currencies like the U.S. dollar and now the Euro.
2.      The new scale of the economy
If your normal weight is, for example, 70 kilos but you increase your weight 20 kilos in months or too few years, it is obvious that you must acquire new clothes: trousers, shirts, jackets, coats, etc, according to your new weight, because you have reached a new scale of volume. The solution cannot be to cut your shirts, to reduce your trousers, jackets, coats, etc. Well, the same happen in the economy.  When this occurs, the traditional public spending already is not sufficient and it is necessary to increase the revenues. The problem is that that augment is not always accompanied by an increase in the public revenues and, therefore, appears the fiscal deficit or financial deficit; this is the difference between the level of revenues and the level of expenditure. In this moment, to realize those concepts is important because the austerity and the reduction of the public spending to avoid the fiscal deficit is the way selected by many governments to face the current economic crisis. The governments are acting like a person that has augmented its weight and reduce, cut their clothes, instead of acquiring new appropriate clothes according to its new weight.
3.      Why are recurrent the economic crises?
The answer is: because the governments ---instead of to realize that the financial resources must be enhanced according to the new size of the economy--- in times of crises they do the contrary: they reduce the financial resources, the public spending and this cause a permanent damage to the economy.
4.      Origin of the fiscal deficit
The historic experience demonstrates that the fiscal deficit has been present during too many years in many countries; for example, during the 19th and the 20th centuries, the phenomenon affected intensely the United States economy. In that period of time, the fiscal deficit surpassed 10 per cent of the Gross Domestic Growth, GDP, in four opportunities:
a) During the Civil War,
b) The First World War, (16% of the GDP) for the year 1919
c) The Second World War, (24% of the GDP) for 1945 and
d) After the financial crisis of the year 2008, (13% of the GDP) for the year 2009; this represents U.S. $ 1.4 trillion. It is important to remember that during the Great Depression of 1929 the fiscal deficit reached only 5% of the GDP.
http://www.usgovernmentspending.com/debt_deficit_history
These facts reveal that in periods of extraordinary economic needs the public finances have been affected also in an extraordinary form.
Nevertheless, we must highlight that the fiscal deficit is not only a problem of exception that comes up in moments of exception like wars or financial crisis. The fiscal deficit has been a permanent challenge for the majority of countries because it is a structural problem linked to an unavoidable situation: the population growth. If the size of the family augment the spending of the family also augment; the same happen in the nations.
In the last decades the world population has augmented in an important amount, especially in the developing countries. In the Industrial nations the population growth has been minor but the needs of the population have augmented because of the expansion of its consumption. This trend of expansion of consumption has been affected only by periods of recession like the Great Depression of 1929, after the terrorist’s attacks of September 11 2001 and most recently, after the financial crisis of the year 2008. 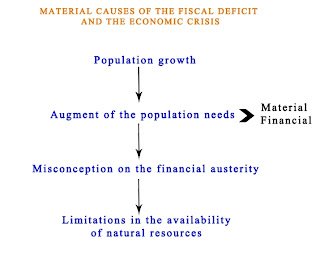 Moreover, other fact accentuates the fiscal deficit phenomenon: the corruption of the private sector; for example, the corruption in big activities that affects the entire society by its volume, like the financial sector, which, through bailouts, absorbs huge amounts of public financial resources. The bailouts of the years 2008 and 2009 in the United States are the best example.
The corruption is caused by the unlimited egoism of the human beings that want more and more money without considering its origin. 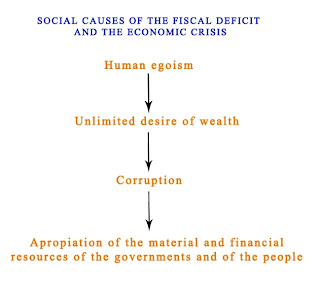 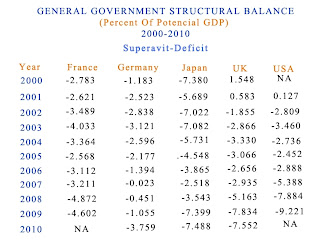 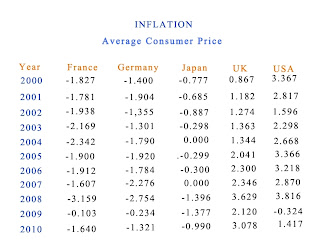 The monetarists assures that the fiscal deficit is responsible of many bad things, among them, the inflation, because for financing the deficit the governments issue money without support; in opinion of the monetarists, this fact put in the hands of the people unlimited resources that promote the inflation. This argument in part is true but in part is not true. An increase of money in hands of the people might be cause of the inflation but, also, might be a stimulus for the supply of goods and services augment. In this case, the monetary growth does not exert an important inflationary effect. But, on the contrary, if the production of goods and services do not grow, then the inflation might augment in an important scale.
So that the fiscal deficit is not the cause of the inflation; the following statistic analysis demonstrates the veracity of this appreciation.


The tables demonstrate that the most important developed nations have a chronic fiscal deficit but, on the contrary, a chronic small inflation; this put in evidence that the fiscal deficit is not the cause of the inflation.
In this case a significant situation deserve to be mentioned: for the year 2009, the United States reached its most figure of fiscal deficit of the decade; notwithstanding, that same year it registered its minor figure of inflation of the decade, -0.324 percent, like you can verify in the previous tables. This confirms that the fiscal deficit is not the cause of the inflation.
13.    True causes of the inflation
The balance between supply and demand of goods and services is not the main cause of the inflation, like assures the traditional economic theory. In the book Apreciación Crítica de la Política Monetaria, el Bolivar Oro, Monte Ávila Editores Latinoamericana, Caracas, 2007, page 138, Spanish edition, I wrote that other factors have a higher impact over the prices augment; they are:
a)      The economic agents unlimited desire of richness, because they want more and more benefits, without limits; in the developed nations this ambition is controlled by the governments, but in the developing countries, by lack of efficient official control, the speculation is the principal cause of the prices augment,
b)      Devaluation of the currencies,
c)      Usury: exaggerated increase of the interest rates,
d)      The price increase of essential inputs like energy (food, water, petroleum, electricity),
e)      Tributary pressure by the taxes increase,
f)       And, in last instance, the unbalance between the supply and demand of goods and services.
All these facts reveal that the cause of the inflation is located in the side of the costs and much less in the side of the supply and demand. So that to speak about inflation in the economic theory strict sense ---like unbalance between supply and demand--- is not something exact in the world economic reality; the most appropriate is to talk about speculation, which is the principal cause of the prices increase in the majority of the cases, worldwide.
14.      There are not limits for the financial resources
There are not limits in financial matter because of a simple reason: money is only metal and paper without intrinsic value http://pablorafaelgonzalez.blogspot.com hence the States (governments) do not have none restrictions to issue the internal means of payment (money in national currency) that their economies require. The true problem for the countries is the lack or scarcity of international means of payment, U.S. dollars and, now, the Euro.
15.   Stages of the growth
I learned from the big philosopher Confucius that a bird cannot ascend permanently; well, the same happen in the economy; she cannot rise permanently. There are periods of fast growing, periods of slow growing and periods of stagnation; this correspond to the essence of nature.
16.    Misconception on the financial austerity
In periods of stagnation, the politician leaders think that the solution is to save money and to diminish the public spending; that is the solution that they are applying in this moment in the United States and Europe; but that is a big mistake because the reduction of the public spending provokes the strengthening of the recession. To be aware of this standpoint would let a better comprehension of the recurrent economic crises causes.
17.    A way
The solution is to increase the public spending and the private consumption by mean of the monetary base growth; this will not generate inflation neither hyperinflation; on the contrary, the monetary base expansion will bring economic recovery: more employment, more production and more consumption.
The unique limitation for reaching the objectives of economic recovery is the availability of natural resources; but a balanced economic program might find, in temporary form, at short term, the right way in this sense. The projections at long term are different, because the natural resources scarcity will be more intense in the future. Only a reduction in the population growth rhythm, the preservation of the environment and technological advances for diminishing the rhythm of natural resources consumption at mid and long term might guarantee the future of the next generations. To feed more than 10,000 millions of human beings will be a very difficult task very soon.
18.      Conclusion
The fiscal deficit is a consequence, essentially, of three facts: a) the population needs augment b) the corruption and c) the misconception on the financial austerity.
The solution for the fiscal deficit is:
-           To realize that money is only metal and paper without intrinsic value;
-          Understanding that there are not limit for issuing money according to the economies needs;
-          To be aware that the unique limitation is the availability of natural resources because man cannot substitute the Mother Nature and create natural resources but man can issue money without limits.