Traditionally, the power of the countries has been associated to the size of their population.
Power and population has been synonymous; but with the development of the science and technology that perception has changed.
Now, the synonymous of power is the scientist knowledge domain; the atomic weapons were the main cause of that transformation.
In the past, the military force was determined by the number of soldiers’ and the conventional weapons; now, the military supremacy is decided by the possession of nuclear weapons.
The atomic experience caused a great impact in the world. The nuclear powers learned the lessons of Hiroshima and Nagasaki in 1945. In the following decades the great nuclear countries participated in new war scenarios ---Korea, Vietnam and Middle East--- but in none case they used the atomic energy.
The military power and the economic power are strongly tied. Without economic development the military power is not possible.
In turn, the economic development is related to the size and purchase capacity of the market ---population--- and other key issues like the availability or not of factors of production and their appropriate use.
Since the theorist point of view, each one of the factors of production ---capital, land and work--- has the same hierarchy. None of them is more important than other. But, in the 21st century reality, the natural resources (land) have acquired a special paper; the reason? Because of signs of scarcity and contamination are already visible in many regions of the world especially in the agriculture sector in matter of water and land.
A similar perspective occur regarding the other forms of energy, like the petroleum, because the reserves are draining in specific areas, among them, the North Sea, the United States, Mexico and China. Hence, a constant increase of the petroleum price is very possible.
The agriculture is the basic form of energy because it provides the food that feed our lives. The food is energy. Now, in the modern world, the petroleum is a basic input for the agriculture because it determines the crops yield by mean of the fertilizers and supply the combustible that move all the machinery, among other basic inputs of the productive chain. So that any increase in the petroleum price touch directly the agriculture costs. The mentioned facts exert a significant impact on the possibilities of the agriculture expansion and the food production at mid and long term.
Demographic control
The other important issue is the population growth. According with the FAO projections, the most augment will occur in the developing countries. In change, the minor growth will be in the industrial nations, because of the demographic transition phenomenon, which mean a high rate of longevity and a small birthrate. If this phenomenon augments in the coming years, the industrial countries will suffer a process of deep cultural change since that new migratory flows sure will transform the custom of those societies. The influence of the migratory groups already is evident in the industrial countries like the United States and in Europe. This will provoke a change in the politics and the economy not only of the recipient countries but in the rest of the world. This is a subject that deserve be considered in a complete work.
The effect of the population growth on the food production will be one of the most important issues for humanity in the coming years.
There are three options to satisfy the growing food population needs: a) to increase the production, b) to reduce the population growth or c) both.
The restrictions that affect the agriculture expansion are well known like the land scarcity, the water stress, the contamination and the inflation in the energy prices; so that the demographic control might be an alternative to tackle the reality.
The demographic control is the action adopted by the states through their policies of population for regulating ---increase or diminish--- the birthrates in a country or region. The objective of the demographic control is to determine the population size at mid and long term.
There are successful cases of demographic control; China, for example, diminished their birthrates in the 20th century notwithstanding to be the most populated country of the world. Other overpopulated nation, like India, has employed too the demographic control to lessen their birthrate. Where the situation is out of control is in Africa.
In other moments of the history, like in the thirty and forty decades of the 20th century, leaders as Benito Mussolini and Adolf Hitler used the demographic control to stimulate the birthrate in its countries. They promoted the marriages and for each son the government gave a reward to the parents. The objective of those governments was to increase the number of soldiers for the war.
The mentioned examples demonstrate that the demographic control has been used in two contradictory directions: by a side to enhance and by the other to restrict the birthrate, according to the population policies of the countries.
A fact that must be mentioned is that the demographic control was employed principally by autocratic governments in the 20th century; but it does not mean that it is a mechanism proper of that kind of regimes, no, the demographic control is an instrument of the policy of population that may be used the same by the democratic regimes and other type of governments.
Unsustainable
The true problem is the global high rate of population augment of the last century ---the most in the history--- and their projection, a trend that will be unsustainable for the limited resources of the Earth at mid and long term. Only the technology might help to curb the consequences of the overpopulation improving the methods of production and distribution of goods and services.
In the thirty years between 1970 and 2000, the world population increase was of 64.43 per cent; the developing countries augment of 81.75 per cent and the industrial countries growth rate 24.48 percent. 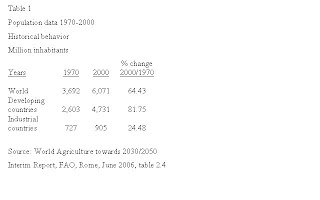 The international agencies, like FAO, assure that the population growth of the thirty years between the year 2000 and 2030 will be the half of the average observed in the last three decades between the year 1970 and 2000. They do not explain which the reasons are for suppose that the historical behavior will change. The projection for the year 2030 is 2,059 million of inhabitants more regarding the year 2000, as may be appreciated in the following table. 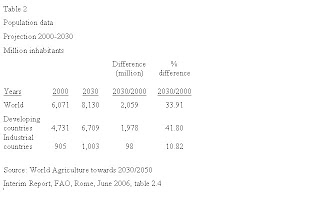 The foreseen total population increase for the year 2030 is a big amount, approximately the third part of the current global total; it mean that will be necessary producing the food that the new population will need. This requires more land and more water, including a most exploitation of the oceans resources and more petroleum and coal. In turn, this implies more contamination. How conciliate all these situations is the key question.
Conclusion
The political economy and the technology might supply the theorist and practice support to tackle basic issues like the production increase and the struggle against the poverty to face the future high population growth. But the demography must play a privileged paper. The demographic control to diminish the birthrate in the developing countries will be something necessary. On the contrary, the birthrate increase will be fundamental for the industrial nations to reduce the impact of the demographic transition phenomenon, which threat to become those countries in societies of old people, societies of senior citizens condemned to disappear at long term. A balance between the population growth of the developing nations and the industrial nations is the fair.
Realistic policies of population should be developed by all the nations; this encompasses key issues like the policies of immigration and the policies of population distribution in the space, to favor the nature and the environment, among others.
What do you think?
Publicado por Pablo Rafael Gonzalez en 6:25 1 comentario: 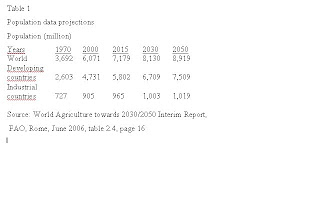 The FAO consider that the world population will reach the peak of 9 billion of inhabitants for the year 2050 and estimates that since that moment will not have growth at global level. In the Overview ---page 3--- of the World Agriculture towards 2030/2050, they explain the forecast of zero population growth for the year 2050 as “…the net result of continuing increases in some countries compensated by declines in others…”
But they assure after that “…zero population growth at global level will not automatically translate into zero growth in demand and cessation of building-up pressures on resources and the wider environment…”
Conclusion
The great problem is how to arrive to the year 2050; how to produce the food that the population will require, in a scenario of water shortage worldwide, overexploitation of the land and growing contamination.
First of all it is necessary to recognize and to say the true at the world.
It is necessary an integral effort of many sectors, among them, the science, the technology, the political economy, the demography, the politicians, the farmers and the entrepreneurs, for giving answers to those issues. The demographers have an especial responsibility. They must be listened by the political leaders and other researchers.
Which is your opinion?
Publicado por Pablo Rafael Gonzalez en 10:34 No hay comentarios: